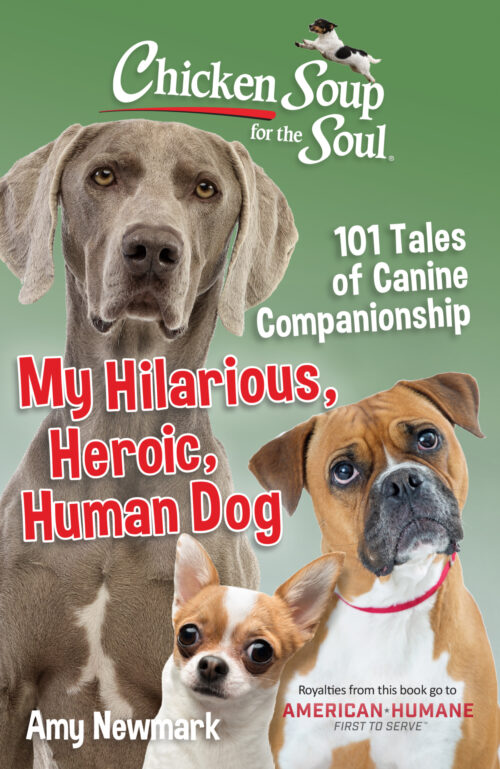 From Chicken Soup for the Soul: My Hilarious, Heroic, Human Dog

A dog can show you more honest affection with a flick of his tail than a man can gather through a lifetime of handshakes.
~Gene Hill

Two weeks before Woodstock, my girlfriend Spirit sat in the lotus position on my couch and said, “I’m moving north with some friends to join the Morning Star Ranch commune.” I admired her tie-dye dress and the flowers in her long, blond hair.

“I need to get into teaching,” I said, “and out of my insurance inspector’s job.” Then I loosened my tie.

We had only met at college four months earlier, so we talked about changes in people’s lives until my phone rang, and the employment-agency woman said, “A teaching job just opened up. Are you willing to relocate?”

“How propitious,” I said. (I was an English major.)

I wrote down the information, hung up and said, “I’m moving to the Central Valley where I can learn more about the 3 Rs — reading, writing and relationships.”

We parted amicably. I packed up and drove east from San Francisco. Spirit hitchhiked north with friends.

Miller’s Landing, population 355, and its old country school with wooden floors, real chalk and real chalkboards, was a twenty-minute commute from my one-bedroom duplex in Modesto. My landlord lived next door and raised cats. I had my job, books and TV, but they didn’t socialize, converse or call. Walks in the nearby walnut orchard only partially filled the void in my life.

One day, when I was on yard duty the boys and girls gathered by the fence. I anticipated a scuffle. Instead, they were lined up to feed a stray dog.

“She followed us to school,” a girl said.

None of the children cared that the dog was a mosaic of mud and weeds. They liked feeding the animal a portion of their lunch in exchange for a “handshake” through the fence.

“She shows up every day,” a boy told me.

On Friday, when I heard that the principal was calling the dogcatcher after school I said, “No, he’s not.”

During my first teachers’ meeting at Miller School, Mr. Beatty, the elderly sixth-grade teacher, had said, “I tell my students, if you smell a goat and can’t find one, it’s time to take a bath.” Well, this dog smelled like a goat. I drove with my windows down and took her directly to the Groovy Groomer Dog Spa.

“What’s her name?” the groomer asked.

While I waited, I purchased a leash, flea collar, sleeping pad and dog food. The clerk donated a sample of cat food.

I walked past stations where well-groomed dogs waited for their owners. Then my eyes locked with the loving brown eyes of Girlfriend, the former smelly goat who was now a beautiful golden Border Collie. Her tail wagged slowly. I grabbed the paw she held out and whispered, “Hello, Girlfriend.”

When we arrived at my duplex, Girlfriend refused to leave my car. I put her sleeping pad on the floor outside my bedroom, opened the back door, and returned to my car. I carried Girlfriend across the threshold and set her down on her pad. I patted her head and her pad. I picked her up. She trembled as I carried her outside and set her down on the lawn. She sniffed the air, sniffed the lawn and, when nature called, stood up and did her business. I patted her head and said, “Good girl.” After I carried her inside and set her on her pad, I knew we had bonded because she wagged her tail.

Girlfriend was my topic of choice during lunch-hour conversations in the teachers’ room. Like a proud parent, I talked about her tail wagging when I arrived home.

Strange to me was that she ignored her dog food but ate the cat-food samples. More baffling was when the neighbor set a bowl of cat food on his front porch and called, “Here, kitty, kitty!” Girlfriend walked to the front door. She got out once and was eating the neighbor’s cat food until I retrieved her.

Mr. Beatty explained that my dog had lived in an alley near the school. When someone in the neighborhood called their cats, my dog knew where to find survival food.

Sunday, we strolled in shallow river water at a nearby park and heard, “Mom, that teacher saved his dog from the pound!”

Suddenly a boy appeared. Girlfriend sat down and stuck out her paw.

He shook her paw and said, “She looks different.”

Richie, a third grader at our school, had been fishing. His attractive young mother in shorts and tank top introduced herself. Bobbie Jo and I got acquainted while Richie and Girlfriend splashed in the river.

Spirit called the Saturday morning of the veterinarian appointment. I said, “Girlfriend’s appointment with Dr. Edwards is now. No time to talk.”

“You met someone? Where?”

Just before Easter vacation, Girlfriend gave birth to three puppies in my kitchen in her cardboard box filled with shredded newspapers.

Girlfriend, ears laid back, sniffed Spirit, sat down and stuck out her paw. Spirit held the paw and said, “Hello, Girlfriend, who does your nails?”

My dog’s tail thumped as she lay down and nursed her puppies.

While I heated food on the stove, Spirit praised my clean birthing box and said the people at her commune smelled like goats. Spirit picked up one puppy, and when Girlfriend returned from doing her business outside, she sniffed her puppy, licked it, wagged her tail and settled into the birthing box.

Normally, she barked if the landlord or mailman even came close to our front door, but that day she wagged her tail for a stranger, which confused me. Girlfriend had not wagged her tail for me since before her pups were born. I felt hurt by her change in loyalty. I mean, I brought her home and fed her. I never asked who had fathered her puppies.

“Females prefer the company of females when babies are involved,” I told myself, but I didn’t realize the depth of my jealousy until I barked, “Janet, why are you here?”

Janet was Spirit’s given name.

My dog sat up. Embarrassed by the jealousy in my voice, I shut off the stove, walked outside and plopped on the bench. I was upset and couldn’t pretend to be in any other state of mind. Girlfriend left Janet to care for the puppies, trotted outside, sat down, faced me and wagged her tail.

“What do you want?” I said gruffly.

Girlfriend put her paw on my knee.

“Aww, geez,” I said, and went through a different kind of meltdown. I lifted her onto my lap, wrapped my arms around her and whispered, “Are you telling me to not be myself, to be someone nicer?”

As if in response to my question, Girlfriend turned her brown eyes on me and gave me a hard look that said, “If you have to ask the question, you already know the answer.”

I suspected I was putting words into my dog’s mouth, which may sound strange to the reader. It sounds strange to me. But, on some metaphysical level, Girlfriend and I must have been simpatico. Why else would she have listened so closely and responded so appropriately?

Girlfriend stared at me in one of those moments when I thought she was going to speak. Sadly, she didn’t talk but did express her feelings for me — she licked my ear and got down.

Girlfriend then worked her mojo on Janet at the kitchen table. First, the handshake, then the lap climb, and then arms were wrapped around her and Janet said, “How’d you know I needed to hug somebody?”

My dog looked at her, as if to say, “No special talent. All of you humans need the same thing — more love.”

As I watched from the doorway, I wiped away a tear because I knew in my heart that I was a better person than what I had shown the two females a few minutes ago.

Janet turned to me and said, “Do you want me to leave?”

“How about if we catch up first?”

I sat at my kitchen table with her.

“And you’ll tell me about the widow with the little boy?” Janet said.

“I dropped out of the commune,” Janet said, “enrolled in the new college in Sonoma County and completed my credential work. I’m now a sub in San Francisco on vacation, same as you.”

“The widow and I have connected,” I said. “Her son fed my dog at the fence. During back-to-school night, he brought his mom to see the dog he used to feed. BobbieJo works at a hospital. Husband was killed in Vietnam. I work in a very small community where gossip quickly becomes fact, but so far no one knows about us, not even her son.”

I filled a bowl with warm cat food and set it near my dog, who wagged her tail.

Next: In the Long Run