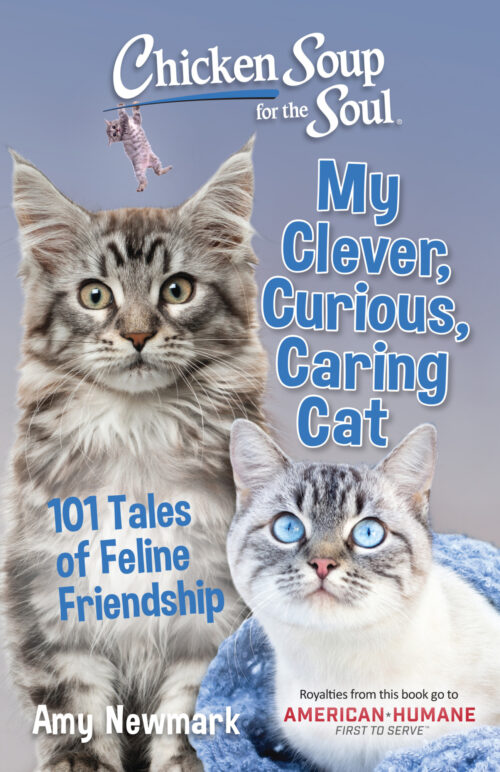 From Chicken Soup for the Soul: My Clever, Curious, Caring Cat

Pets are humanizing. They remind us we have an obligation and responsibility to preserve and nurture and care for all life.
~James Cromwell

I found him on my doorstep one day in late summer, nearly eight years ago. He regarded me fearfully as I walked up the garden path toward him. As I drew closer, he crouched with muscles taut, ready to take flight. I stopped and waited for him to make his next move. I talked to him in what I hoped were soothing tones, but as soon as I started to move toward him again, he sprang up and vanished into the bushes surrounding the front of the house.

The following day, the little cat was there again, lying on the doorstep, but still with the don’t-come-near-me look on his face. This time, however, instead of a hurried flight into the bushes, he got up slowly, stretched, and walked around the side of the house in quite a dignified manner. I decided to leave a saucer of milk on the doorstep in case he was hungry and let him go his own way. After all, I thought, he might live in the neighborhood and just be paying me a visit. The next day, the saucer was empty.

Over the next few days, he spent more and more time hanging around the house until it became obvious that he was a stray. The saucer of milk was replaced by a bowl of cat food, and he became a regular visitor, morning and evening. Although he looked fully grown, probably about a year old, he was small and very pretty. He had long gray fur, and all four feet were tipped with white. As far as I could see, his eyes were a smoky blue, but I could never get close enough to tell. When it became clear that he intended to stay, I named him Pookie — short for Pussy Cat, the name my mother had affectionately given to all our cats. In spite of repeated attempts to befriend him, he never came close enough for me to touch.

I love cats, as I do all animals. They were always part of my childhood. I would gladly have given Pookie a permanent home, but unfortunately that wasn’t possible. We had four rescue dogs, one of whom was a dedicated cat-hater who would have happily killed any feline she could catch. So, I put “Cat Found” notices up in the neighborhood and a short piece in the local newspaper, all to no avail. Taking him to the crowded Humane Society, where I was sure he would be euthanized, was out of the question. So, I resigned myself to coping with an outdoor cat.

Autumn came and went. The weather turned to snow and ice, and Pookie was as aloof and evasive as ever, running from me if I got too close but always present at mealtimes. One day, I opened the front door to retrieve the morning paper and was shocked to see a little bundle of gray fur lying motionless on the walk. At first, as I bent to touch him, I thought that Pookie was dead. Then a faint cry, barely audible, reassured me that he was still alive, although badly injured. I hurried into the house and locked up all the dogs. Then I returned to carry his frozen little body into the kitchen. I saw congealed blood on his head and neck, and fresh blood oozed from his mouth. I wrapped him in a warm blanket and sponged the blood off his face and body, realizing for the first time how thin he was despite several weeks of nourishing food. As soon as my vet’s office was open, I rushed him there immediately.

As the vet sutured Pookie’s wounds and administered antibiotics, he said this looked like a typical cat fight where a large male had beaten up a weaker cat that he found in his territory. He said he would keep Pookie overnight, and if he was doing well, he would send him home with me in the morning.

All I could offer Pookie in the way of shelter during his recovery was a glassed-in, unheated porch where everything was liable to freeze in winter. So, before he came home, I found a sturdy box that I wrapped securely in a blanket with only a small covered opening at the front. Another woolly blanket lay on a heating pad inside and made a warm nest for him.

He tolerated treatment of his wounds, lustily ate the food I brought him, and used a litter box when he was strong enough to walk. But, to my surprise and disappointment, he remained aloof, never showing any particular pleasure when I petted him. I found this very strange. I couldn’t remember a time when I hadn’t been able to win the affection and trust of an animal. Even pet rats from childhood had bonded closer to me than this little cat.

While he was recovering, I managed to find a no-kill cat shelter about thirty miles from my home. When I contacted them, the owners said they were willing to have my erstwhile stray join their “happy cats.” So, when Pookie was fully recovered, a nice lady appeared with a portable cage, and he was borne away without giving me a second glance.

I often wondered what happened to my little protégé, and one day I called the shelter and asked if he had settled in and was happy. I was surprised to hear that he had been adopted a few weeks after he arrived at the shelter. If I was really interested, someone could call the adoptees and check on him.

Apparently, an elderly couple had chosen Pookie because he reminded them of a beloved cat they’d had previously, who had died of old age. Then I had another surprise. The three of them had bonded instantly, and Pookie was a cherished member of the family who loved to sit on their laps and sleep on their bed at night. I could hardly believe what I was hearing!

A trifle ruefully, I thought of the times I had held Pookie in my arms as he recovered from his wounds, stroking him tenderly as he lay inert on my lap. Never once was there the remotest rumble of acceptance, that deep purring sound like the idling of an old automobile or any rhythmic pummeling of contented little paws on my knees. Though I had hoped to win his affection, I didn’t. But caring and doing the right thing were reward enough.

Next: Put On Something Else