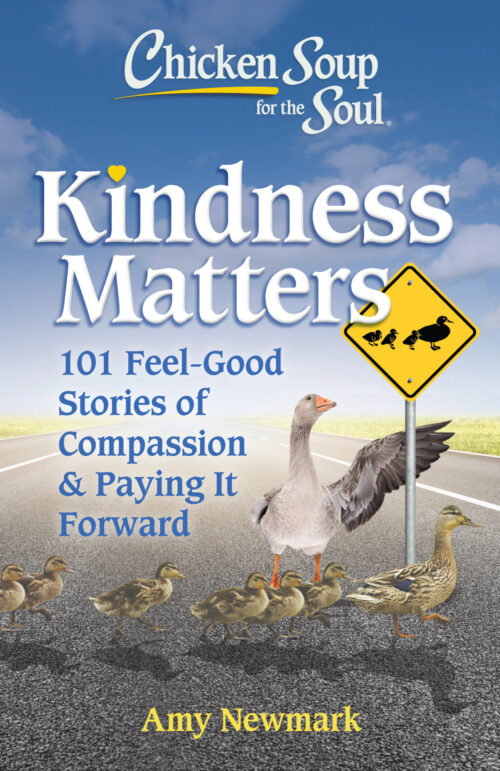 From Chicken Soup for the Soul: Kindness Matters

Just being there for someone can sometimes bring hope when all seems hopeless.
~Dave G. Llewelyn

One December, I was stranded with one-year-old Gail and three-year-old Bruce in a tract house on the side of a small mountain. Our car, which I had no license to drive, was buried in a snowbank, and my parents were ninety icy miles away. My husband Morrie had just signed himself into the psychiatric ward of the veterans’ hospital in New York City, forty-five miles away.

My visits were supposed to be part of Morrie’s therapy. Visiting hours were limited to the afternoon, and the train was my only option for getting there. But how? I had the kids and no car, and I didn’t know anyone who could help.

We had moved into our “dream home” barely three months before, and I had met only two of our neighbors. The closest, about a city block away, had eleven children and was pregnant with the twelfth. She was too busy with the cleaning, cooking and taking care of her family to notice me or my problem. Other neighbors, Jane and Chet, about two blocks away, had four children. One of their children was Bruce’s age, and they hit it off right away. Play dates had become a highlight for all of us to get together.

Jane was an excellent manager/mother, and when she heard about my plight, she said immediately, “Now, how can we solve this problem? I could pick up you and the kids, drop you at the railroad station, and then take Bruce and Gail back to my house until you come back. Then I could pick you up at the station and bring you and the kids home.”

“Jane,” I said, “that is a huge responsibility for you to take on with all you have to do with your own family.”

“The kids love to play together, and I can manage the transportation with Chet’s help,” she answered confidently.

I was overwhelmed by her kind offer, but it was my only solution. Thursday was the day she was most comfortable with, and the following Thursday she picked up the kids and me, dropped me at the train station, and said cheerfully, “I’ll pick you up at 6:30.”

The visit was a nightmare. My husband was belligerent and violent, and I wondered whether my visit had been helpful at all. It certainly wasn’t for me. His psychiatrist, however, said it would help. I tried to pull myself together on the long train ride home so that Jane, her family and my kids would not know what an ordeal it had been. Jane, however, was marvelously perceptive. She took one look at me and said, “I have a great dinner. Won’t you please stay?”

The kids were all happy and boisterous, and she and Chet were wonderful hosts. Their love for their family and each other was obvious in the interactions between them and the children. It spilled over to me and the kids. My misery subsided, and by the time she drove us home, the love and kindness in her family had me believing everything was going to be okay.

For the next three months, every Thursday at 12:30, Jane showed up, no matter the weather. Often, the roads were icy or slushy, and getting down the mountain to the railroad station was hazardous. She never mentioned the road conditions, but after we settled the kids in the back seat and I got in the passenger seat, she made the sign of the cross, kissed her finger and touched it to the Saint Christopher rosary hanging on the rearview mirror.

I boarded the train each week with a mixture of apprehension and hope about the visit. As I looked out the window on the ride into the city I wondered if the people in the great houses I saw, surrounded by picture-postcard snowy lawns, were happy in their beautiful surroundings. When the train became elevated in upper Manhattan, the tenements were at eye level, and I could peer into the long, dark hallways and shabby apartments. Curtains on the windows were tattered and torn. Gratefulness for my little, sunlit house filled my heart.

Some of the visits went well, and Morrie would show interest in the kids’ antics and achievements. Other times, he became angry at me for “putting me here.” I learned to duck when he tried to punch me. I spoke softly when he yelled.

Jane, always perceptive, could tell how the visit went without me saying a word. When the visit went poorly, she always had a “great dinner” waiting at home and made sure I was okay before she or Chet drove us home.

Morrie did not progress, and when he signed himself out of the hospital against medical advice, his psychiatrist told me to take the kids and go as far away as I could to make a new life for my little family. We left suddenly, with no forwarding address, and I never saw Jane, Chet and her wonderful family again. Without her kindness, I never could have survived those awful three months. Her love and the way she conducted her life have been an inspiration to me.

Previous: Put On Something Else

Next: The Gift of Hope