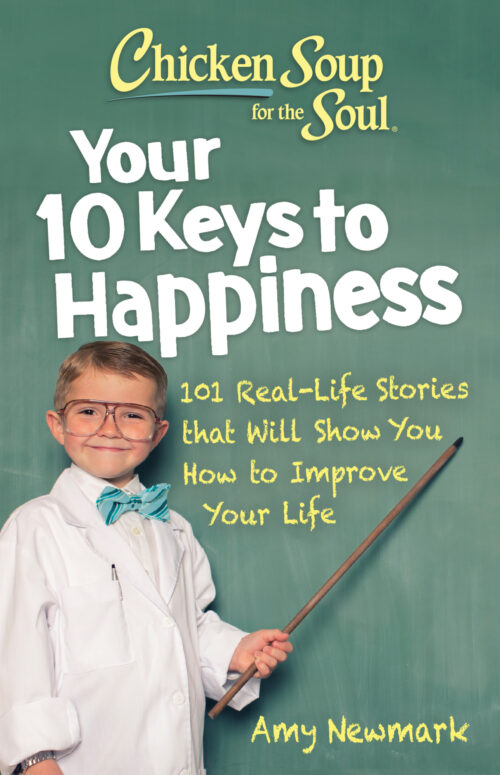 From Chicken Soup for the Soul: Your 10 Keys to Happiness

You can’t live a perfect day without doing something for someone who will never be able to repay you.
~John Wooden

I walk nearly every evening, rain or shine. Although the area where I live has sidewalks, ball fields and open spaces where most people do their walking, I prefer to walk in the cemetery across the street. It’s nearly forty acres of rolling land full of mature trees and all manner of wildlife. It’s filled too, with many graves. Toward a back corner, just a few feet from a rusted section of chain-link fence choked with honeysuckle, is Baby Wendell’s grave.

On my daily walks I began to stop now and then to upright a vase, pull a weed or pick up trash. I don’t always take the same route, so I never focused on any grave in particular. I just did what little thing needed to be done if I noticed, and kept walking. It was obvious when family or friends would tidy up around a grave, and it became clear that some graves never got attention other than the general maintenance by the cemetery staff. No one ever visited Baby Wendell. The little granite urn on his tombstone would fill with old leaves, grass clippings and spider webs. The day I noticed wiregrass smothering his tiny tombstone, I decided to make Wendell a routine stop.

My daily walks also meant that the many visitors who came regularly on Sunday afternoons or holidays would see me at one place or another on the grounds. I’d often be mistaken for an employee as they stopped to ask, for instance, where section L was, which gate exited where, or how to find the main office.

One Sunday evening, two elderly women who I later realized had seen me there many times, drove up as I was bent over picking a dead wasp out of Wendell’s urn. Not wanting them to think I was up to no good, I stood and walked toward them to say hello. They were all smiles and I was surprised as they began to thank me.

“We see you out here real often. How long have you worked here?” the first woman asked as she adjusted the bouquet of artificial flowers she held in her hand.

The second woman added “Yes, and after that last storm you were the first one we saw out here picking up sticks. It’s just so good that you work here.”

I watched the first woman struggle with her bouquet and said, “Oh no, Ma’am. I don’t work here. I just walk here.”

As it turned out, they were sisters who had come to put flowers on their brother’s grave. His is located just a few sites over from Baby Wendell, between a dogwood tree and a very old azalea.

“But you’re here just about every time we come by,” the first woman said, still fighting to get a grip on the bouquet in her hand, and looking puzzled that I didn’t work there.

“And looks to me like every time we’ve seen you, you’ve been working,” the sister added.

I explained to them how I might randomly pick up a stick now and then, or put some wind-blown trash back in the can, but that they only saw me so often because I had one day noticed the wiregrass that nearly covered the tiny tombstone near their brother’s.

“Why? All that and you don’t work here?” the first woman asked.

I’d never given it much thought. I walked there nearly every day and it was just part of my walk to upright a geranium now and then. I had occasionally remembered what Nannie, my grandmother, used to tell us kids: “If you see a need, fill it, and don’t worry about who gets the credit.”

“Well, we can’t thank you enough for all we’ve seen you do,” the first woman said, as a little piece of her bouquet of flowers broke off.

“Oh, it’s just wonderful that you would help for no reason,” her sister added.

They both seemed about to tear up as they walked away. I never thought about needing or getting credit for any of the random things I only sporadically did as I walked, but these two women had noticed and they had thanked me. Those tiny efforts took so little on my part, but to them they meant a lot. They noticed and they appreciated.

I suppose we all do random nice things because we know it’s right and it’s kind. Baby Wendell could never thank me, and none of us imagine we’ll ever be thanked for the tiny things we do, and we may not believe anyone even notices. But out there for each of us is the equivalent of those two old ladies, noticing and appreciating.

I reached down and picked up the tiny piece of bouquet the woman had dropped as she thanked me. I finished weeding Baby Wendell and put those flowers in his little urn.

“No need to thank me, Wendell. You’re welcome.”