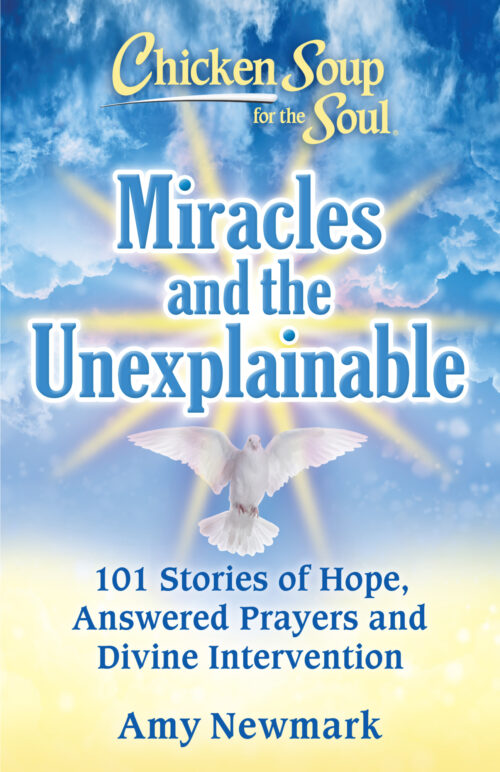 From Chicken Soup for the Soul: Miracles and the Unexplainable

Music gives a soul to the universe, wings to the mind, flight to the imagination and life to everything.
~Plato

The phone buzzed on the nightstand, jolting me awake. When I looked at the clock, and saw it was 10:00 P.M., I knew. This was “that” call — the one I had wished would never come.

“I’m sorry, but your mother has passed away,” said a sympathetic nurse. “I checked on her shortly after you left, then again at nine-thirty, and she was still breathing softly. When I checked back a few minutes ago she was gone. I’m so sorry for your loss.”

I had expected this but I was still unprepared. I stumbled around the room in shock, feeling lost, no longer sure how to dress myself. I couldn’t focus.

I was only eight years old when my mother first faced death. A radical hysterectomy due to an ovarian cancer diagnosis had resulted in internal bleeding, which posed a greater threat to her life than the cancer. Somehow, she beat the odds and survived both.

Blessed with an additional eighteen years, my mother lived on to raise me and cherish her life with family and friends. Then death challenged her once more. This time, it was colon cancer that forced her onto the operating table.

We talked privately before her surgery, sharing our thoughts, fears, and hopes with one another. My mother’s deep green eyes sparkled with a love that reflected our unbreakable mother-daughter bond, and she patted my hand tenderly as she spoke.

“Don’t worry, dear. I’ve survived worse. And, if my time has come, I know I’ll walk with God.” She smiled warmly. “I’m not afraid, even though I have so many unanswered questions, so many things I’d like to know before I go.”

I nodded reassuringly, wishing I could say something to soothe her worried mind.

“I’ve often wondered,” she said, her eyes wandering off in thought, “once we are on the other side, whether our heavenly spirits can communicate with our living loved ones.” She looked at me, her eyes glistening. “I hope so.”

I smiled in understanding but fought back the lump in my throat and a wave of tears.

“You mean the world to me, sweetie,” she continued, “and if anything happens to me, I’ll want you to know I’m at peace and everything is okay.”

I squeezed her hand. Candid discussions were not uncommon with my mother, but what followed caught me off guard.

“When I die, whenever that day comes,” she said. “I promise to find some way to send a message to you and put your mind at rest. What do you think?”

I looked at her for a moment in silence, then finally said, “I would like that.” I hugged her, hoping such a thing was possible but praying that “that” day would be far, far into the future.

The surgery was successful, and chemotherapy would not be required. We celebrated, and she never took a solitary moment for granted. Eleven more years passed before the extraordinary woman I called my mother faced death once more.

Pancreatic cancer inflicted another grueling surgery upon her, and then a post-operative collapsed lung threatened her life. As strong as she was gentle, she pulled through. Granted two more years, my mother gained another precious gift of time with family and friends. Like before, she counted her blessings and never squandered a second. Then the day came when I received an urgent call from my father.

“Your mom collapsed. I rushed her to the hospital and an MRI revealed a huge mass. She just came out of emergency surgery. There’s nothing they can do.”

For three months, my father and I took turns sitting at her side in the palliative ward, all day and most nights. I slept on a cot next to her until she slipped into a coma.

It was the evening after Mother’s Day when “that” call finally came. I managed to get myself to the hospital to see her while she was still in her room. A few minutes after I got there, my father came into the room with their pastor. I hugged both men. Like lost souls, we stared at a woman who had filled our lives with so much love and hope, unable to absorb the reality that she would no longer grace our lives.

After a long silence, I asked my father. “Did the nurse call you, too?”

He shook his head. “She called Pastor Sam, and he showed up at my door a few minutes ago. I guess I gave him a bit of a shock.”

I tilted my head. “What do you mean?”

“I answered the door dressed and ready to go.”

A strange feeling crept over me. “So, how did you know?”

My father smiled as tears stained his rosy cheeks. “You know the hymn I wrote for your mother?”

I nodded and fought the urge to weep again. I knew the song. She had begged him to finish it before she was gone, but time had run out.

“I haven’t had a chance to work on it or think about it for months,” he said. “But tonight, the song woke me up. I swear, I heard your mother softly humming it to me, like when she was at home. After that, I couldn’t sleep. So, I got dressed and sat down at the piano to finish her song. By the time Pastor Sam knocked on the door…” My father choked up. “I already knew she was gone.”

We sobbed into each other’s shoulders, then looked back at my mother. She looked so peaceful.

On the car ride home, I remember my mother’s promise so many years earlier. That’s when I realized the significance of what my father had said. A feeling of calm washed over me as tears streamed down my face.

Through a song written in her honor, a hymn that symbolized her faith and precious bond with family, my mother had found a remarkable way to keep her promise and say farewell.