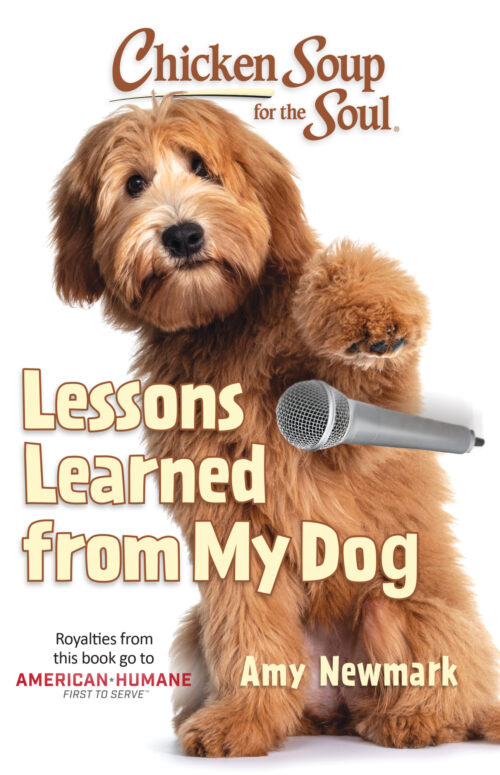 From Chicken Soup for the Soul: Lessons Learned from My Dog

We never know how God will answer our prayers, but we can expect that He will get us involved in His plan for the answer.
~Corrie ten Boom

I am not a dog person. That sentence makes me giggle as I sit here with my sixty-pound English Springer Spaniel, Barkley, cuddled up beside me on the couch. One floppy ear covers the Delete and Backspace keys on my keyboard.

Two of my three children begged for a dog at various stages of their preschool and early elementary years, but they gave up when they learned that I am more stubborn than they are. They received a “No” from this mama every single time they brought it up. Not a “Maybe.” Not a “Someday.” Not a “Let me talk to your dad.” A hard “N.O.”

Then, we hit some bumps in the road. Breast cancer struck when I was forty. We had a falling-out with some people we loved, which changed the trajectory of our lives. And we crashed head-on into the teen years when I was smacked with the reality of how little time I had left with these three boys I thought would stay small forever.

So, I started praying this prayer:

Lord, life is hard sometimes. Our family has walked through some tough stuff. Please show me how to love my boys well and make the most of the time I have left with them. Amen.

After I started praying that prayer, a picture of a dog started popping into my head. I ignored it, mind you, because getting a dog was not an option. But it wouldn’t go away. I found myself wishing God was leading me toward a Disney Cruise, but it became very clear that it wasn’t a vacation but a furry little four-legged creature he had in mind.

It took a while to wrap my head around it, but I finally submitted, and we found an English Springer Spaniel puppy looking for a home. He was stinking adorable, but I had some anxiety thinking about all the work that lay ahead of me. I mean, I’ve potty-trained three humans, but I wasn’t sure if I was up to the task of potty-training a non-human. I was committed to that little puppy, but I still wondered, “Is this huge undertaking going to be worth it?”

We surprised the boys with Barkley on a September Saturday morning. Shock and awe is probably the best way to describe their reaction. They all three loved Barkley from the start, but I was surprised to find that my oldest son, Carter, the one who had never once in his life asked for a puppy, seemed to connect immediately with the little guy — more than his brothers, who had worked to wear me down for years.

About twenty-four hours after Barkley came into our life, Carter’s girlfriend of almost a year broke up with him. It was his first teenage break-up, and it was painful, both for him and for the mama who had to stand on the sidelines and watch. But with a broken heart and puffy eyes, he cuddled that puppy. The little fluff ball became his comfort.

It’s been a few years since Barkley rocked our world. And though he likes to eat shoes, remote controls and books, he has changed our family for the better. He’s been around for a couple of broken hearts, he’s been a pal to play with to alleviate boredom, and he’s served as a personal space heater for every member of our family.

I don’t know what the future holds, and Barkley may be the only dog that we ever invite into our family, but he has been a gift to us. An unexpected, fur-covered gift.

Reprinted by permission of Chicken Soup for the Soul, LLC 2023. In order to protect the rights of the copyright holder, no portion of this publication may be reproduced without prior written consent. All rights reserved.

Previous: The Blessing of a Smile